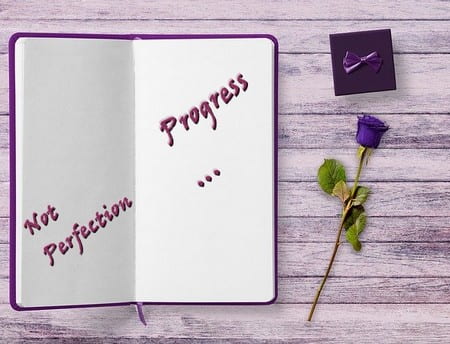 Image by DarkmoonArt_de from Pixabay

A spontaneous impulse lives in us towards “the most perfect”; it always lurks our newborn goals, it prowls the corners of our decisions, it even infiltrates the atmosphere of our most ingenious dreams.

We go against this impulse by simply searching to progress, by each small step of our own determinations. The irresistible cintilation of perfection ceases its hypnotic power just after the first shaky steps which  reveal we have chosen the adventure of progressing.

As a nocturnal expedition, where the map is drawn as we move forward, the humble discovery of what is uncertain and unheard: thus is the the meander of writing, groping along the elusive and graceful mouvement of words, aspiring their live freedom…

I’ve been tagged both by S. Wyatt and Bookjewel to answer this meme!  Until now it has been a pretext to so many pleasant and even fascinating readings. I think it is worthwhile to know each other better in such an informal way, where we feel  totally free about the subjects we talk about, yet we choose them with the care that special readers deserve.

1.       My grand father was a Brazilian consul always moving from a country to another; thus my father – who is Portuguese –  found my mother living  in Spain;  as soon as they got married they emigrated to Rio de Janeiro, in Brazil, where I was born. While we lived on Bahía da Guanabara border, he used to take the plane, every Sunday night, to spend the whole week  working in S. Paulo. As soon as my mother would hear the plane roaring over the bay, she would quickly switch on and off the lights of the  living room and he could distinguish the twinkling spots of light as if she was waving at the terrace.

2.       My two favourite authors are: Hans Urs Von Balthasar, a Swiss theologian and Christian Bobin, a French Poet. I would recommend “Love alone is Believable” and “The Very Lowly“, respectively. My most unforgettable readings are those related to theology and poetry.

4.       Now I feel really embarrassed to explain this to my network: I created my class blog in September, so that my kids could participate in the blogging competition; then, I started talking with them, mainly in comments – as for the posts, the translations of Miss W.’s posts were perfect to keep them going – . However, I was confronted with the fact that I should sign my name with a previous “title”, and not just the “bare” name, as it is usual for students to address their adult teachers using a “title”.

But Portuguese students don’t say just “Miss Ines”; they use a slang word, a sort of nickname issued from the abbreviation of the “honorific title” we have been given after University. So, “stora” isn’t even a proper word in Portuguese, it literally means “Miss Doctor” which sounds totally silly and is never pronounced aloud. Me too, I have always called my teachers as “stor” and “stora”, it’s a very old “tradition”, I can’t figure out when it has started. Real doctors – I mean those people who have studied medicine – along with vets and some other professions are also called as “stores” even by grownups.

So, I started to sign “stora Ines” whenever I commented on young people’s blogs, and now both words represent my name on the Bringing Us Together front page. Thus I felt that I owned this explanation to our visitors and friends, as “stora” is not my name at all.

5.       Since my young days I deeply love the French language and I have been, as an amateur translator, to several youth international meetings in Fatima and in Paray-le-Monial, France, as well as to a youth world day in Paris. These are privileged moments where we always make new friends and nurture our common, invincible hope that all peoples, cultures and races will come together in peace.

6.        I’ll share three precious memories of travelling abroad: crossing the Holy Lake to reach the small town of Dunoon, in Scotland; watch the sun rise on the snowy peaks , at the French village of Saint Monêtier les Bains at the High Alps; sleeping under the stars in the fields of Umbria, near Assisi, in Italy.

7. I lived in South America, North America and Europe, in three countries and five different towns. But these were all by the sea, so my favourite walk remains to follow the coast line, in a calm or in a speedy pace. Unhapily, I can’t do it now, for I broke the external meniscus of my left knee. 🙁

I took so long to answer this meme, I’m afraid there is no one left to tag in all the blogosphere…but I’ll try: