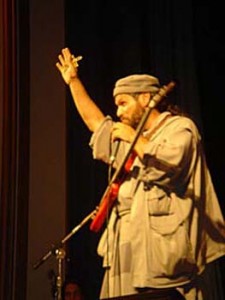 Every year – for more than 13 years now – a Franciscan friar from South Bronx, New York, keeps coming to Portugal, to visit and preach a retreat to his youth group – “Jovens de S. Francisco”.

Father Stan is a musician, he composes all sort of different kinds of music, such as Jazz, Folk or Rap; he sings and sells his songs all over the world to get some money in order to help his friends in Bronx, where he lives with other friars and friends that were homeless once.

He also goes all over the world to preach, sing and visit friends, specially young ones, as this time he did with us, giving his concert in our school, in June. He came earlier than usual as he was heading to Australia, to collaborate in the organization of the youth world meeting that will be held next July, in Sydney, Australia